Session 19 - Under the Rune Tower

The group eats breakfast and then decides to head down below.

Adfric is not doing well. The poison is from the ice spider is freezing his right hand where he was bit. He does not benefit from natural healing and is -2 on all roles.

As they explore the level below they come across a large room with  2 large earth-boring beetles. They kill the beetles and move on.
In the next room is a tomb which is guarded by a powerful undead creature. The monster tells them to leave and they obey.
At a point, they find a doorway covered with dwarfish runes that give a warning. Phelan tries to open it and a large explosion rips through the group almost killing Na'ab.
Toutorix tries again and almost kills himself.

Dwarves are not figments of imagination...

They're quite obviously real, by a second order approximation.

It's the construction arts and the obsessive devotion to detail. The intense quality of work above and beyond what might normally be required. But altogether the patterns of a group of peoples that indicate they are real.

And so, where did they go?

We've moved to explore the Rune Tower, a place of stonework in the north, based upon following the depredations of a group of pig faced men around the Lake upstream of Daggerbeak. The faces are different now, we've uncovered what appear to be goblins ransacking the Rune Tower. They are different but the pattern is unchanged. Children are disappearing and I do not believe this is a coincidence.

The roots of this evil are very deep, and spread wide. I think something this vile must be an existential threat to the realm. They too are obviously real, another second order approximation.
Whether or not we return home, this matter should probably be brought to His Majesty's attention.

Adfric lays on the ground, shivering from the cold of the venom flowing through his veins. The group tries everything, including lighting a small fire in the staircase hallway.
Phelan and Na'ab go up to the upper floor and find an armory. They make way to the top of the tower to find a ballista. Na'ab believes he sees some large creature to the far north.
Na'ab feels the temperature drop as dark clouds roll in from the north.
Toutotix hears a loud banging sound from below. He heads down to see what it is. It sounds like a hammer banging on stone. He opens the door in front of him. Surprise!
Six goblins are standing before him.
The battle begins as the group ends up facing 25 goblins armed with spears and short swords.
Heroic fighting wins the battle. 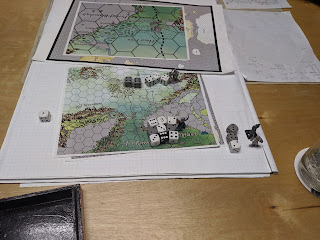 The group ends up resting for the night. They bring the horses in from the storm.

They group wakes up and Phelan opens a secret door in the hearth of the ground floor tower room. He finds a pair of Dwarven Bracers of Defense AC 4.
The group decides to take the stairs down to the dungeon level below.

"Why are these goblins so far from the mountains?"
Posted by DM_Angelo at 3:44 PM No comments: