It is one year after the terrible events at the rune tower. A time of prosperity is upon the north as a false winter came and went. The scholars tell that a false winter is a sign of joyous bounty and others warn of a coming storm that will lay darkness across the land for hundreds of years.

The adventure begins at the port town of Blue Harbors. Lord Theon Branch has commissioned your group to check out an old abandoned keep called "The Old Keep". Local rumors say that this keep is the base for a group of bandits others fear a greater evil that waits.

Our adventurers are eating dinner at the warm and famous in: The Hounds Tooth

The Hounds tooth
On Hartspool Avenue, near the bell tower. The street outside is paved with decorative flagstones.
The inn is a two-storey stone-walled building, with a slate roof and a large cellar. A collection of fine tapestries hangs on the walls. Accommodations consist of several large rooms with beds and feather mattresses.
The special for this evening is: Pickled Shellfish and Bitter Cheese with Tankard of Beer
Accommodations: Bath, Breakfast and Dinner and a soft bed. 10 SP
The innkeeper is a young male dwarf named Bossk 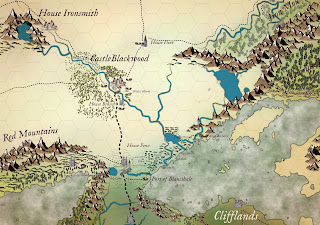 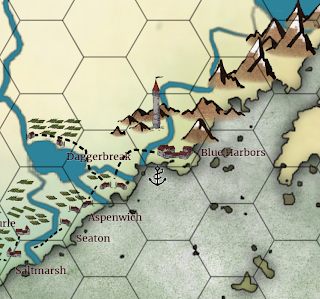 "The meal is flavorful and the beer is wet", says the dwarf! 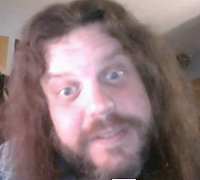 The group hear all kinds of rumors from the local madman:
A pike that roams the river up and down granting wishes to the locals.
The Nubian witch of the forest.
Foreign bandits looting and pillaging.

And, many many more.


Our group heads out the next morning, June 16. It is an overcast day.

Instantly, Fritjof gets his foot ran over by a horse cart. That hurt.

Thorston Snow is challenged to a duel by the local drunk. He loses to the disgust of the crowd.

On the road to the Old Keep, the following encounters happen:

Shrine to a Nature God and the healing of the tainted tree.

Wagon Wheel. Half buried in the dirt. 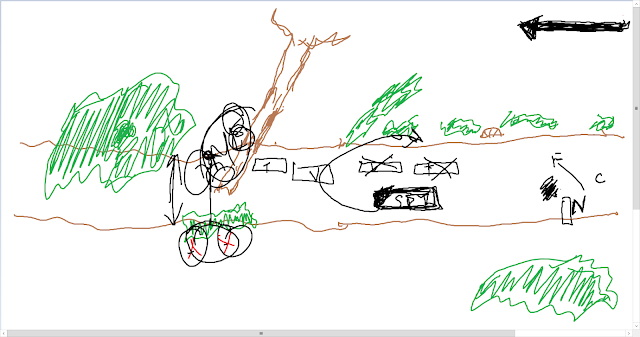 This is a session zero of the campaign in EOS. 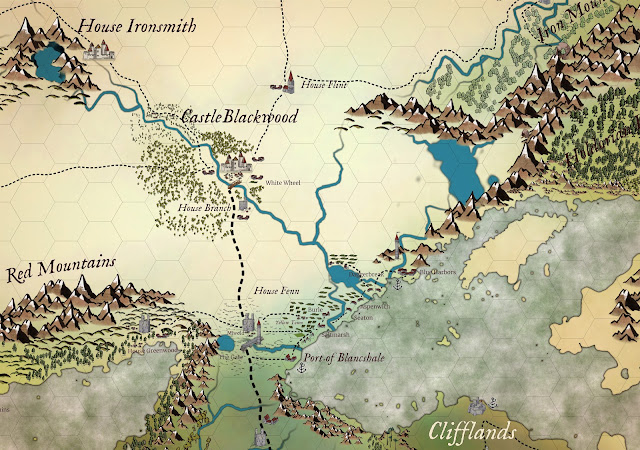 Session 34 - A Children's Story from Clown Poggytoes of House Branch

Session 34 - A Children's Story from Clown Poggytoes of House Branch

Children want a story of Magic, Heroes, Elves, and Demons hmmm?  Well I have a good one for you future masters of House Branch.

Over a hundred years ago House Branch was under assault from a great evil.  The Drow had returned to our world.  The Dark Evil Ones had taken out the Good Elves and they wanted the Dwarf Stone.  They kidnapped children to sacrifice.  Some used to open demonic portals. Others of the Lost Children turned to hideous demonic creatures.  They had plans to destroy this House Branch.  But the gods looked kindly upon us and sent blessed heroes who fought for justice.  Their names

Three times did the group have to use the terrifying fireball.  Every time it took some of their own down.  Burnt to a crisp.  Heroes had fallen.

The final battle.  The group was weary from fighting.  For Al Jezzer the Great Witch had a large stock of henchmen.  Men of Zax and terrible Scaly Lizard Men she did employ.  Along with a array of demons she would summon.

So tired and unable to go on the Party of Heroes made plans on what to do next.  Then all of a sudden a mighty earthquake struck the temple.  The Heroes knew the time to strike had come.  The Temple was collapsing.  Then by chance the Paladin Valkomen Gimilzor spotted the Evil Witch Al Jezzer and her minions fleeing.  He confronted the Witch.  He got one mighty blow on the Witch.  Then her bodyguards came to her rescue.  They held off the Paladin.  Khirr the Great Barbarian of the Iron Tooth Clan then came in swinging at the Witch.  Confronted with the might of the Party the Witch decided to flee.  She used her magic to teleport away.

The Battle was not over.  The screams from the children could still be heard.  A great many of the children came from Khirr the Barbarians People.  In a mad rush he charged down the stairs.  Intent on saving the children no matter the cost.

Into the lowest room of that foul dungeon they went.  It was the alter room.  This was the place used for sacrifice and summoning demons.  There the party found a Great Demon freshly summoned.  Was it this that caused the Earthquake?  Immediately the Barbarian and Paladin confronted the Demon Thing.  Phelan Duncan the Magi and Cadman Kane the Magic User rushed over to a table filled with magical books and devices.  The others held the demon off.  By the Will of the Gods Phelan Duncan discovered it was the Altar of Evil that needed to be destroyed.  After this revelation the Great Demon opened a hole to hell and escaped.  However the day was not won yet.  The children chained to the walls all turned into foul monsters.

Tremendously outnumbered our heroes fought.  Before they all fell the Magic User Cadman Kane used his Wand of Wonder to take out all the Evil.  Only two survived the blast.

With the Altar and Temple destroyed the survivors went back to House Branch.


Posted by Mordenkainendogpissbeer at 9:26 PM 2 comments:

Jezzer you Drow Elf Witch my sword cut your flesh.  For all those children and whatever other horror you have done to our lands.  You teleport-ed away fast as you could.  It was not fast enough to escape my blade entirely.  I hope it left a nasty wound you foul witch.

My Brothers in Arms that died down in that foul wretched temple of Evil.  You are still owed vengeance against that Witch.  Lost Brothers your names shall not be forgotten.


The village that lost most of the children that Jezzer kidnapped.  They said they will make a plaque with your names.  Storytellers will tell tales for generations.

Our Great Heroic Magi Phelan Duncan was able to learn much of what the enemy has been doing.  What their goals are.  Sadly he has had to go off on solo mission.  Magi Business he called it.

Until the next mission I will train harder than ever before.  I know the dark and awesome power of the enemy. My sword calls out for justice against Al Jezzer.

One last thing.  Men of Zax I have not forgotten your part in this!  I killed several of you down in that hell hole.  However my sword arm still hungers for justice.

We got to the end. We were going to destroy the alter....

Cannot resist the flute of wonder....

The Protector protected,
And told his tiresome tale anew.
I see the Darkness,
As the crushed lotus leaves have long knew.

Only 2 Survive the Original Group sent down in here!  We find them just after they had a battle against a demon.  As a Paladin I have been trained to ignore such fears.  However the truth is we are over matched here.  The enemy is to great.  The first opponent we meet.  My sword made by the best blacksmith in the castle does nothing.  The sword passed through the fell beast.  Later a giant arm comes out of the summoning circle and grabs the Magi.  It is dragging him to the fire.  I can seemingly do nothing.

Then I remember the vials of Holy Water I was given.  One vial was enough to get the hand to release him.  This battle is barely over and we hear doors opening. More monsters coming at us. Soon they will be at out throats. Yet again we all have a close call with death.  We capture one and he tells us some things.  We know where she is now.

We need time to rest and heal.  So much horror in one day.  Ancient Trees grant me strength.

Valkomen Gimilzor Paladin, Knight of the Full Moon
Posted by Mordenkainendogpissbeer at 11:30 PM No comments:

Session 33 - Is this all an illusion?

Heading down into the idol, the group joins a new magic user and paladin from house branch.
They come to a ceremony room and fight a demon being summoned.
There is more to uncover

Ritual book found
Posted by DM_Angelo at 9:37 PM No comments:

I cannot begin to chronicle what happened here. 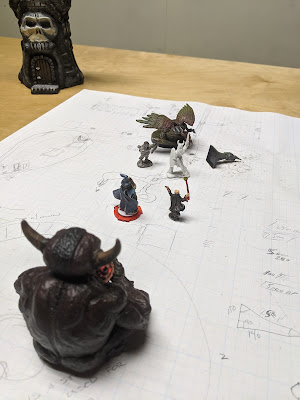 Of Dust on Grass, On Sand over Stone, mine eyes wept.
As Barbarian rubbed Fleck and Dredge over Pre-Potioned flesh.
And As Magic mends bone,
As Potion 'geals innards,
As Prayer steels heart,
The sinewy beast became Shaman, remembering the ghosts of his peoples,
The wanderers of frozen tundra, and their knowledge of nature's intricate puzzle.
Aye, I wept, cast aside with very last breaths, thinking without voice, Ho! brother
As I Lay Dying.
Posted by Eric_Potter at 7:33 PM 1 comment:

SHE sets a trap for them.
The hypnotic beat of the drums come from the idol and the lava men dance forward.
It is another close call for the group as they are attacked by sub demons, spiders and lava men.
Trapped in the idol room.
Posted by DM_Angelo at 11:25 AM No comments: