Fritjof hears fighting in the small tower on the third level, then it suddenly stops. He goes and investigates, 2 large men and a goblin are tying up the other party members.
They come up with a plan to bring the fighters down the spiral staircase. It works.
Frijof kills the smaller fighter as Nachtheim puts the goblin and giant to sleep.

They go to the third level and find their friends.

Session 43 (POV Valkomen) The Plan Is Going To Work!

Very excited that my hastily formed plan does seem to be working.  However I'm a bit upset in that it appears St. Bede has passed me in near death experiences.  I just can't let this stand.

How this happened.  We where down in the dungeon and unable to find a way forward.  St Bede needed to get outside and get some fresh air.  Plus the remaining rations were in the stable.  St Bede eats a lot of food.  All that praying must make him hungry.

Stretching and taking a look around the grounds of the keep we found another of Fritjof's Sewer Entrances.  Sir Thornston and St Bede were of like mind in thinking it led to a unexplored part of the dungeon.  However it might be days before Fritjof is any condition to go down there and explore.  Sir Thornston and I can't fit down that skinny pipe.

I suggested we have another whole tower and several low buildings to explore of the Keep.  We should go and do something.  Sir Thornston was game however St Bede was reluctant. He was still recovering from the huge battle in the dungeon.  Without Fritjof to open the doors we had to tie ropes and yank them open.  This is very time consuming.

The three of us entered the lower level of the unexplored tower.  However no encounters.  Although recent signs of a fire in the fireplace.  Someone has been in here.  We decide to go up to the next level.  No sooner do we make our way up and then we here a argument upstairs.  It is in Xaxian.   They talk about loot and not wanting to pay a tax to her.

Bursting out onto the 3rd Floor of the Tower I immediately see two of the biggest Xaxians I have ever seen.  There was also a tiny goblin.  Three in all and a fair fight.  With the Gods on our side we should be able to win.

Sir Thornston Snow made it to the top with the assistance of St. Bede.  Sir Thornston was then immediately cut down.  St. Bede drew his sword ( Clerics using swords) and was cut down.  I made a few attacks against the biggest of the Xaxians.  A magnificent fighter.  Never have I encountered such defense before.  I quickly made a tactical decision to attack the other two.  If I could reduce the number to 1 on 1 I could probably take him.  One blow apiece I was able to cut the other two down.

I traded several more blows with the Great Xaxian Fighter.  However I was unable to even scratch him.  Full knowing Xaxian's love of dirty fighting I tried to parley with him.  Hoping he would try something and this would give me a chance to get a blow in.  Sure enough he tried something.  To counter so did I.  Neither of us did any damage to the other.  However he changed tactics and now came at me in a attempt to knock me out.

In a sudden inspiration I recalled what Sir Thornston had said on the stairs.  He said something about Xaxian's would want to capture us alive.  So as the Xaxian prepared another pommel attack I stepped into it.  Letting him knock me out cold.

Now things are going to plan.  The Xaxian tended to our wounds and has us tied up.  We are alive and hopefully to be brought to her.  No more wandering around lost and having to kick in every door.  We will be brought straight to her.   Why didn't I think of this plan earlier?
Posted by Mordenkainendogpissbeer at 12:02 PM 1 comment:

The group decides to go to the small tower in the rear of the keep. They climb the stairway to the 2nd level.
The paladin hears something upstairs on the 3rd level.
It sounds like they are arguing over where to hide the spoils so "she" does not tax them too heavily.

Xaxians!!!
They race up the metal spiral staircase. Thornston slips, cleric catches him. Cleric drops the candle lantern.
They get to the top and behold 2 giant men in platemail and one goblin.

It all goes down hill from there.

But no,
here comes the rest of the party to rescue the fighters.

Session 42 - (POV Valkomen) How Many Lives Does A Saint Have?

Somewhere in the Dungeon

Just like that everybody in the party is Super Heroic.  Our Great Saint Bede is trying to pass me up for most Near Death Experiences.  I think we are tied now?  Even Nachtheim risked his life foolishly.
It must be something in the Dungeon Air?  Our Dwarf Dwarf Karr is a berserker.  He really does not like skeletons.  I had a long grueling battle with one of the enemy leaders.

I still do not understand the fascination and lust for gem stones.  We found some and the others went nuts for the rocks.  Okay they are pretty stones, but there are more important things to consider right now.   I had to put a end to their fiddling around with that chest we found.  Mr. Fritjof nearly killed himself and the priest playing around with something inside the chest.  Seeing the results of the poison gas cloud that issued out of the chest.  I picked it up and carried it outside.

Good thing I brought my lantern as the next room had no lighting and was full of undead.  It is very hard to fight them in complete darkness.   It was this epic battle that my companions displayed their Heroic Actions.

We live and are closer to revenge against her.
Posted by Mordenkainendogpissbeer at 4:03 PM 1 comment:

The group enters the crypt and battles a host of skeletons.

Session 41 - (POV Valkomen) After all that the horses walked across the bridge just fine!

After hours of scouting, debating, and a massive battle in the now collapsed tower.  Well the horses were able to just walk across the bridge.  My magnificent war steed is safely in the stables eating hay.  I hope he still is.  Suddenly our Great Locksmith Fritjof is able to open every lock he sees.  He was even able to disable the Killer Statue that nearly ended my life.  Mr. Fritjof even found a very useful bit of correspondence from the Enemy.  The letter err note has proved to be of great use as we used it to find a way into the dungeon of the Keep.

The enemy is nice enough to provide a great many lit torches.  Almost as if we are invited down.  It was not very long before Sir Thornston set off a mechanical trap.  I was lucky to get out of the way.  He is alive it was just a flesh wound.  Shortly after that we met some men with huge eyes and clawed hands.  Finally get to work my sword.  I dispatched one but not before Sir Thornston and Karr the Dwarf Dwarf had been paralyzed by the monsters.  The other monster was destroyed by Nachtheim using the Black Iron Crown's Magic.

The use of the Black Iron Crown is most interesting as I had last seen it in possession of St. Bedici our Cleric.  Of course I was unconscious for awhile from the Killer Statue Incident. They may have made a trade or something?

It appears we are taking another break or something.  This passageway is apparently at a end.  There is another passageway we have not tried yet.  I have great hope.  She is down here.  The Old Gods will grant me a chance for Revenge!

Session 41 - The Note and the Dagger 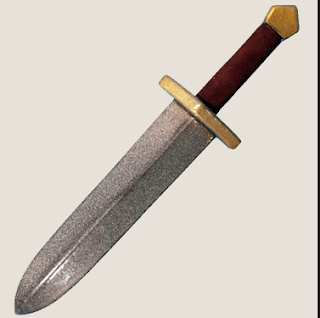 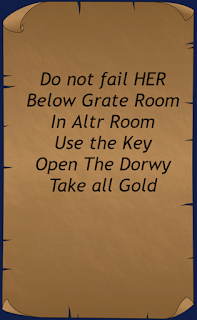 Following a lead they head to the dungeon level.
After Frijof shows off his thieves skills they make it to a ghoul lair. 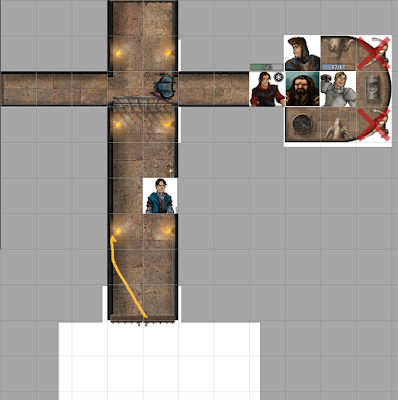