Game Session 4 - At the sign of the Merry Mermaid

The sign of the Merry Mermaid...
Session: Game Session 4 - Wednesday, May 29 2019 from 6:00 PM to 9:00 PM
May 8 996 Third Age Summers End
Evening
Cloudy
Entering Saltmarsh from the South
The Players
Goliath (Sellsword)
Gmüller (The Orphan Sellsword)
Adfric (Sellsword with a 10 Strength)
Phelan Duncan (The Magi)
Enter Saltmarsh at during the evening looking for an Inn. 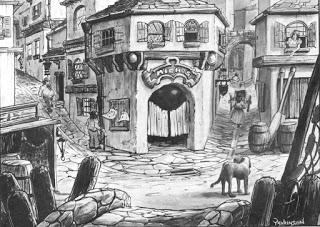 Knock on the door of Ben the locksmith who helps them with directions to the inns and taverns of Saltmarsh.
They notice a billboard near the docks with pleads to find missing children
Go to the full moon inn


The inn is a single storey wooden building. Accomodations consist of a single large room with wooden cots and straw mats near the hearth.
1cp per night
The thin man Thildo is the Innkeeper
They head to the tavern for food
The Merry Mermaid
Hura Haldidotr
The inn is a single storey stone-walled building, with several leaded glass windows.
The meal of the day is:
Salted Shrimp and Bitter Cheese, Tankard of Perry (10 cp)
Hura tells them about the Haunted House on the Cliff outside Saltmarsh. She tells rumors of the Necromancer who disappeared years back and the strange lights that are seen late at night. 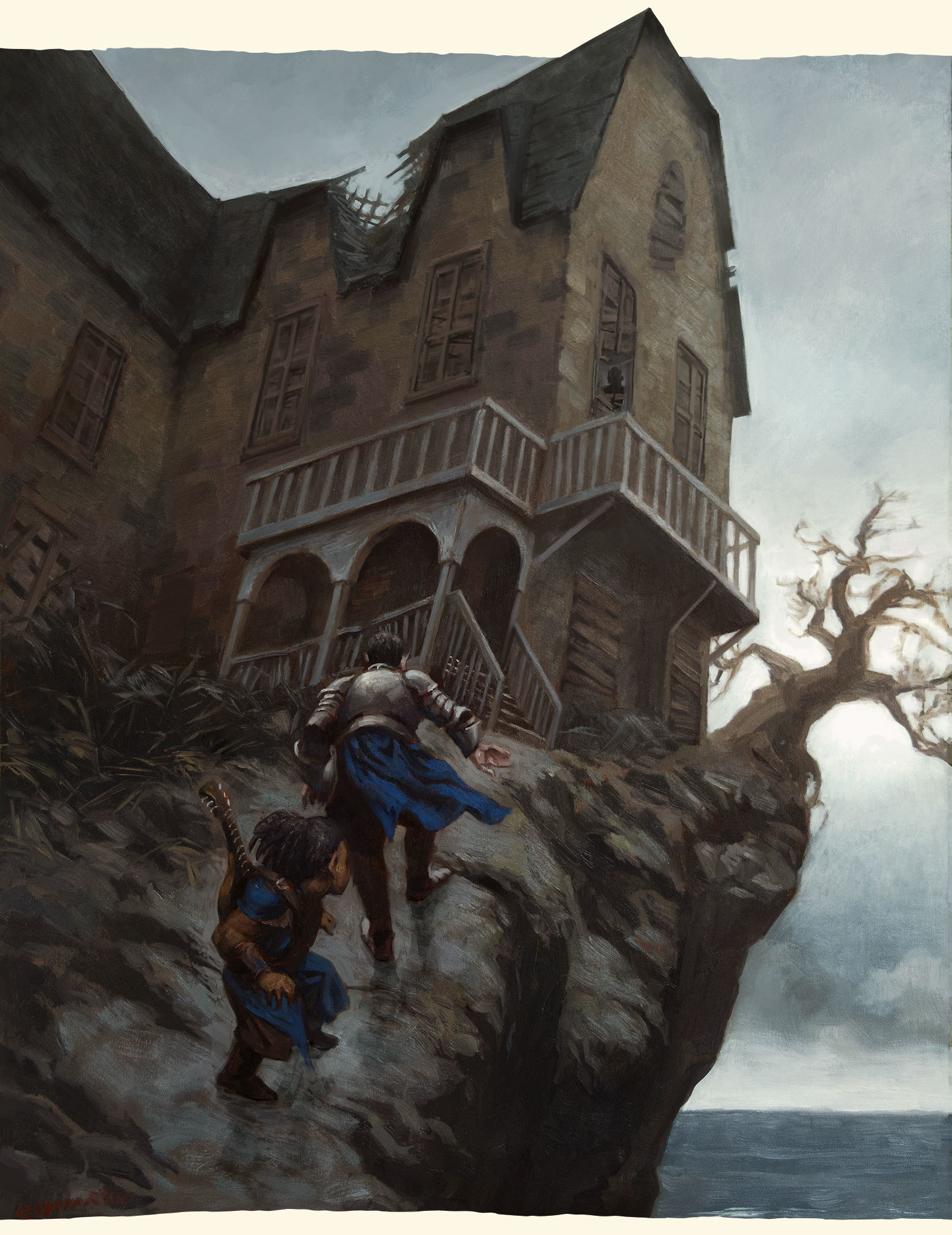 Game Session 3 - The road to Saltmarah

Of the rest of Goliath....And the road to Saltmarsh
Session: Game Session 3 - Wednesday, May 15 2019 from 6:00 PM to 9:00 PM
May 3, 996 Third Age Summers End
Daytime 59 degrees
Setting
East of Miwold, On the road to Saltmarsh
The Players
Goliath (Sellsword)
Gmüller (The Orphan Sellsword)
David (The Winter Wolf)
Phelan Duncan (The Magi)
From May 3 to May 8 the group stays on the farm to give a hand a allow Goliath a chance to heal under the close care of the healer Phelan.
May 8
Daytime 59 Degrees Cloudy
Head out in the morning
25 Miles to Saltmarsh
At Hour 5 they come to a "T" in the road near the cliffed coast.
They head north and pass a merchant
A couple miles from Saltmarsh they come across a small pack of hungry wolves. The Alpha challenges David and a battle begins.
David is taken down and then the group comes in to fend them off.
The pack runs as the alpha drops.
Phelan quickly binds the wounds of David.
They have no choice but to leave him on the side of the road.
The group enters Saltmarsh
Encounter:
9 Wolves
Loot:
N/a
Famous Quotes:
"Know your audience!"

Farewell to lil' brotha
Session: Game Session 2 - Wednesday, May 08 2019 from 6:00 PM to 9:00 PM
May 2, 996 Third Age Summers End
May 3, 996 Third Age Summers End
Daytime 60 degrees
Setting
East of Miwold, On the road to Saltmarsh
The Players
Goliath (Sellsword)
Gmüller (The Orphan Sellsword)
Thorsten Snow (The Bastard Hedge Knight)
Lil' Brotha (the Squire)
David (The Winter Wolf)
Phelan Duncan (The Magi)
Lil Brotha leaves with the Hedge knight to take him back to Miwold
After 5 miles meet Phelan Duncan travelling on the road to Saltmarsh
Another 2 miles
2pm 11 miles out
At 230pm Eat lunch
Head out again 3pm
4pm 12.5 miles total travelled
6pm it gets dark
Goliath goes down from the attack of a large constrictor snake.
During the next morning Phelan heads east to get help. He comes up to a farm and begs for help.
Meanwhile, Gmüller faces off against a WartHog that wants to eat Goliath.
Phelan arrives with help from the local Orange Farmer, Jamas. They throw the giant man in a cart to head to the farmstead.
Encounter:
Giant Constrictor Snake
1 WartHog
Loot:
N/a
Famous Quotes:
"Looks like meat is back on the menu boys!"

"Are we beginning little brotha?"

The group enters the inn: The Crossed Arrows Inn.
After ordering dinner of Dried Pheasant and Chestnut Bread, with a Tankard of Mead to wash it down they speak to a old local named Keli.
Keli tells of adventure in the east at a town called Saltmarsh.
The innkeeper has hammocks available in the inn for 5 coppers which Thorsten gladly pays.

During the next morning, breakfast is had: Millet Porridge, Mug of Ale for 3 coppers, and they set out. Before leaving they stop at the traders and purchase a couple of beaver pelts.
On the Eastern Road to Saltmarsh
The group is stopped by three splint mail-clad vagabonds who demand payment for passage. Goliathdoesn't like that notion of paying anyone to use a free road so he draws his sword. A battle ensues with our hedge knight falling to the sword of a bandit.
The group decides to turn and round an get some help for the valiant hedge knight who seems to be in dire need.

Famous Quotes:
"Big Brotha, buy them some furs to keep them from freezing!" 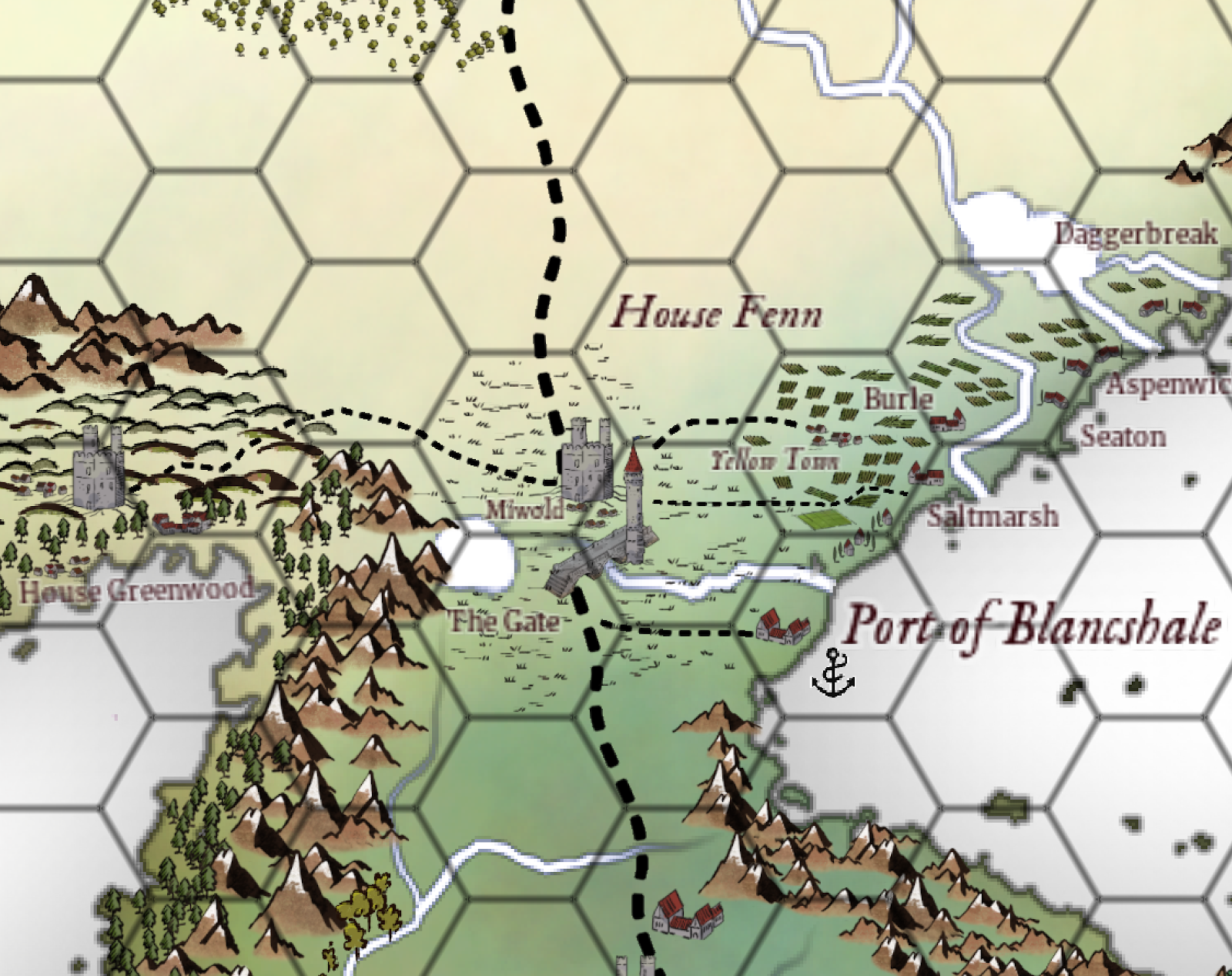