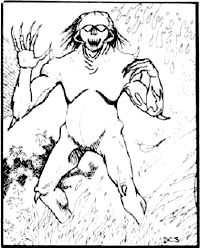 Banging at the door below
It heats up and begins to smoke - explodes
Khirr goes to the front door and sees a cave troll coming in from the outside.
The group is doomed.
Posted by DM_Angelo at 9:18 PM